Re-discovering America … by the book!

Some of the links below are affiliate links, which means we will earn a commission on the products or services you purchase using the links. There is no additional cost to you and the earnings help keep this website running. Read the Affiliate Disclaimer for more information. 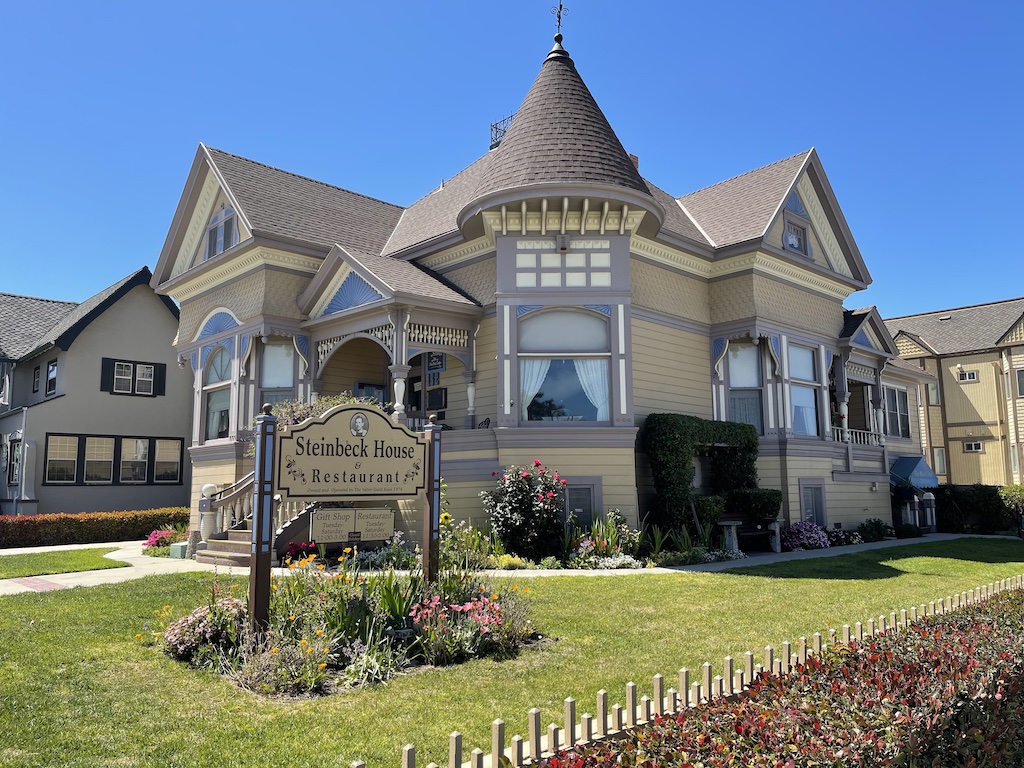 Yes. But he’s still all over the place in Salinas!

[Hmm… that might not have come out just right.🤔]

One of the most epic things we enjoy, as full-time RV Travelers and Book Lovers, is finding and reading great books all along the way. Sometimes then having the opportunity to VISIT THE BOOK, so to speak: Discovering connections to the story, setting, characters and author in our travels.

Last week, we talked about Steinbeck’s Travels With Charley on the blog: 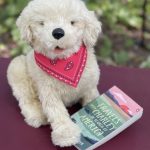 Russ and I started this RV adventure last year, listening to the Audible audiobook version of Travels With Charley, read by actor Gary Sinise. It was excellent: The perfect start to our year-long, cross-country adventure! ⭐️⭐️⭐️⭐️⭐️

I then read the book, for the total experience (of course!), and because I was reading it with the Midtown Atlanta Book Club in July (via Zoom!).

May 2022: We found ourselves heading toward San Jose, CA to visit friends.

Coincidentally enough, the Coyote Valley RV Resort in Morgan Hill (San Jose), where we stayed for the week, was 45 minutes north of Salinas on Highway 101…

How could one possibly resist a Literary Day Trip… in search of John Steinbeck?

Finding Steinbeck in Salinas (It was easy!😉)

First, let me give you the Facebook re-cap of the adventure (in case you missed it!). And then we’ll talk about the 10 Most Fascinating Facts…

CALIFORNIA (Salinas) 1/4: Literary Side Trip to spend an ENTIRE DAY with JOHN STEINBECK (maybe his ghost?) at the National Steinbeck Center (Museum). It was amazing. The exhibits of his epic books & movies were on such a grand scale, impossible to capture in pics. You literally walk through each novel. It was breathtaking. 🤓❤️📚 #50states50books 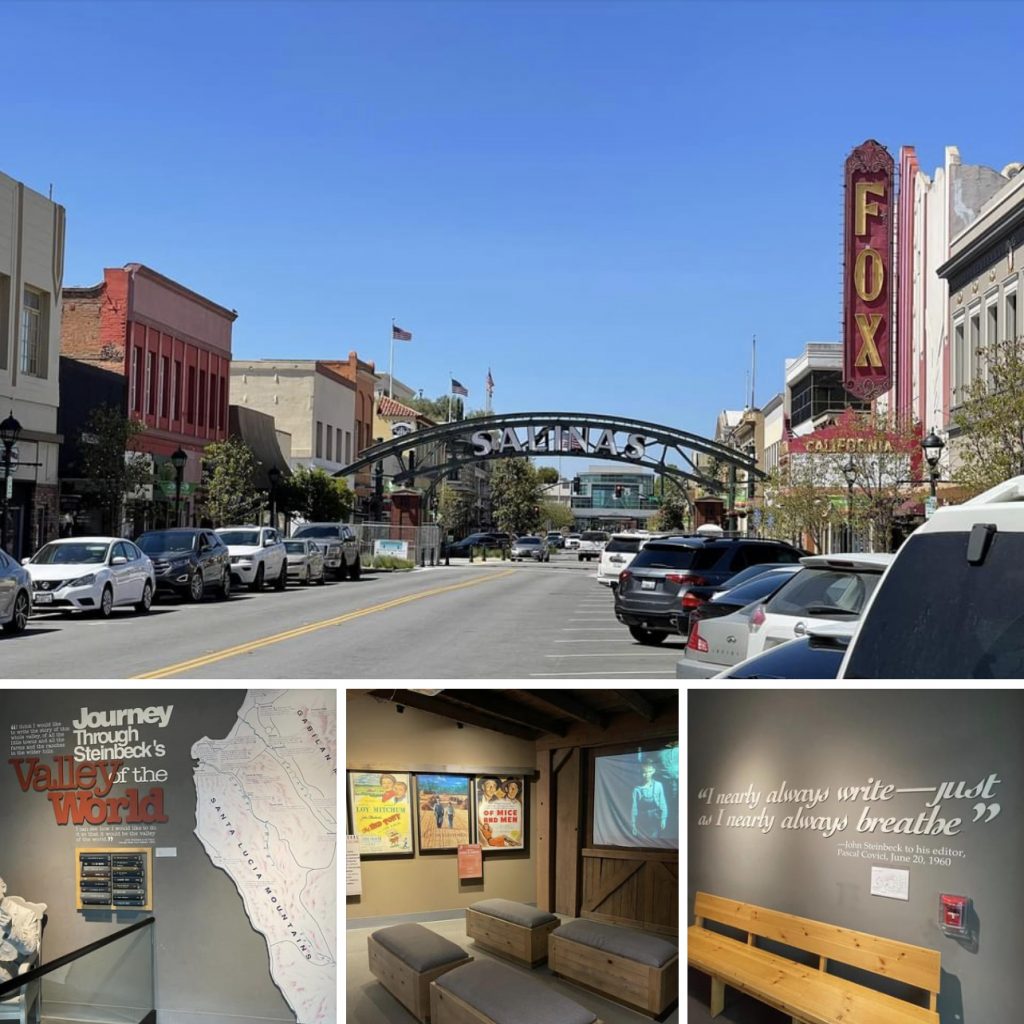 CALIFORNIA (Salinas) 2/4: …an elegant lunch at The Steinbeck House Restaurant & The Best Cellar Gift Shop at The Steinbeck House. This is actually Steinbeck’s birthplace and childhood home. He was born in the front bedroom! Beautiful restored home & gift shop is a very unique landmark, well worth the visit & lunch! Personal tours & history by volunteers. 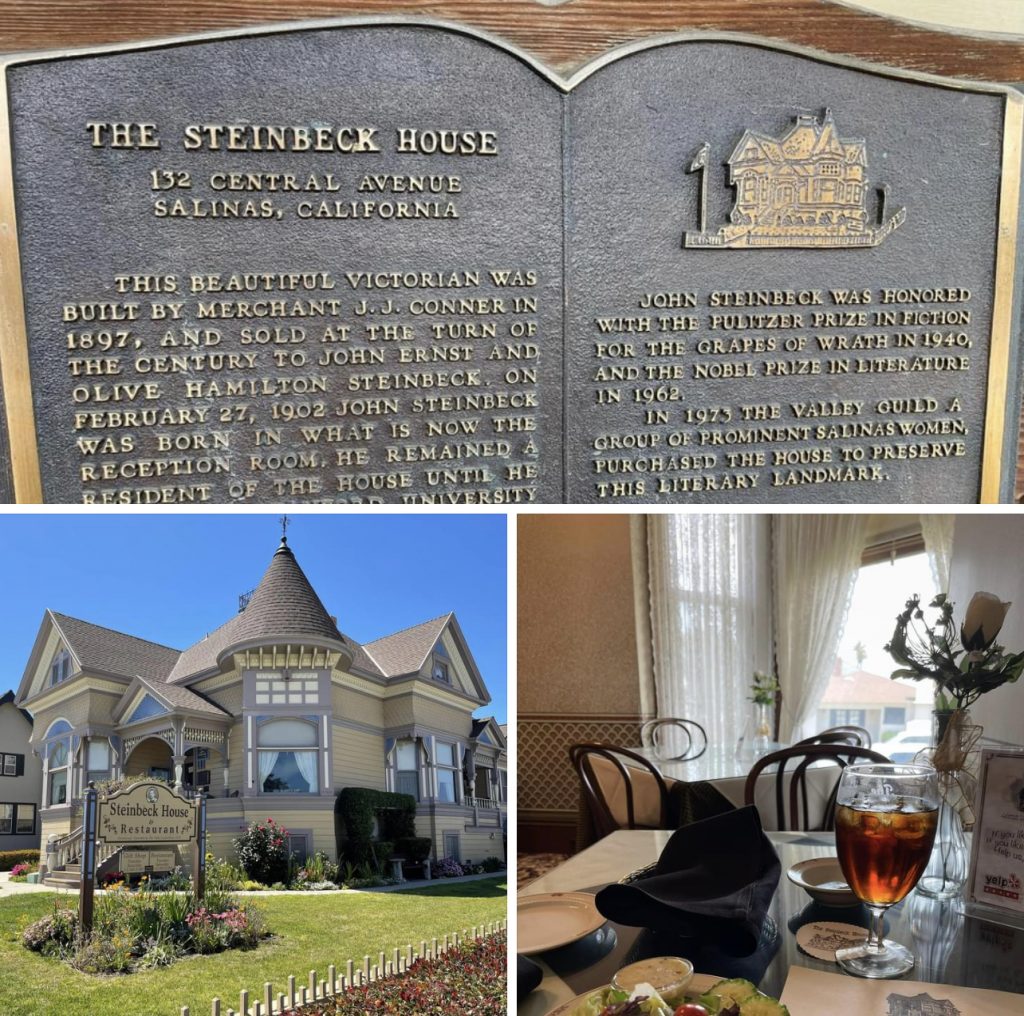 CALIFORNIA (Salinas) 3/4: At the National Steinbeck Center – THE REAL ROCINANTE!!! Lovingly restored and donated to the museum by a fan. Wow! Travels with Charley in Search of America. (For my Midtown Atlanta Book Group, reading Travels With Charley – July 2022 🤓❤️📚) #booknerd #fangirl #50states50books 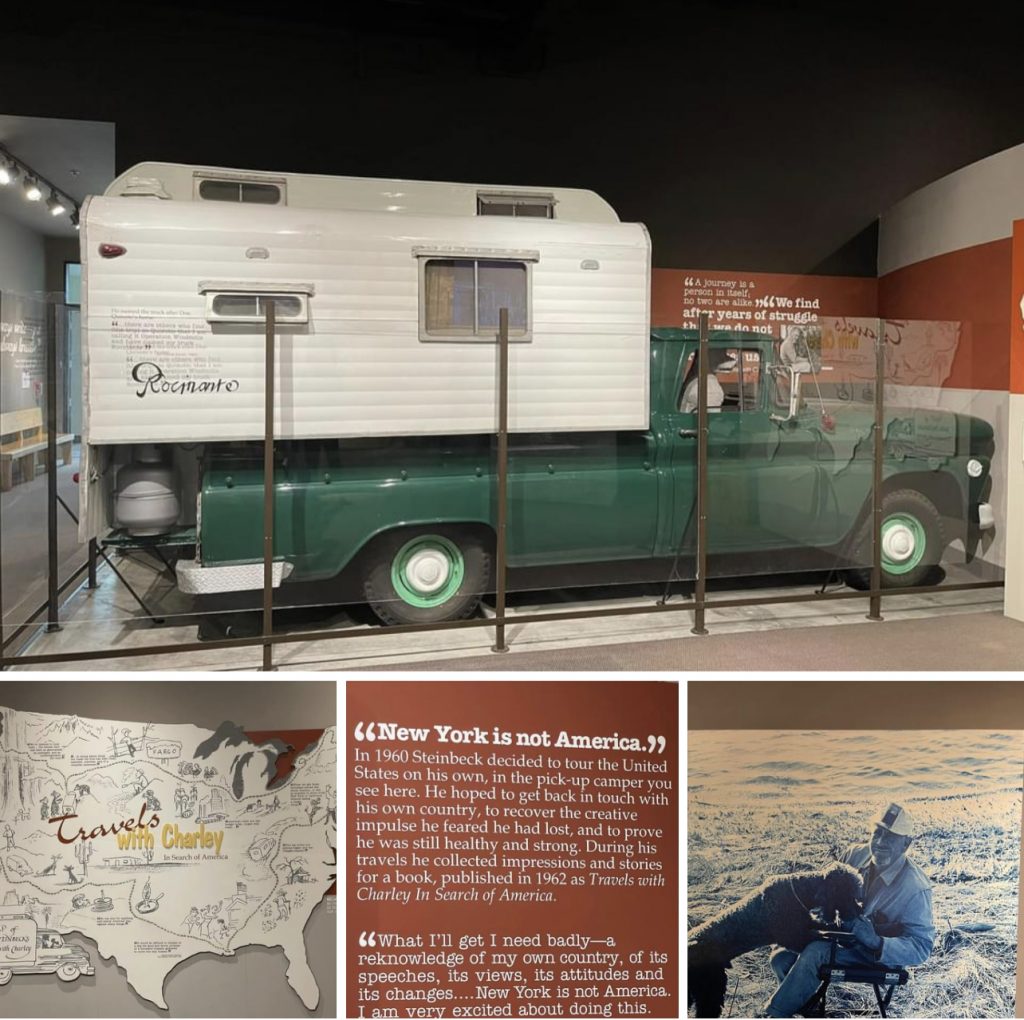 CALIFORNIA (Salinas) 4/4: interior pics of a very famous RV! I know I’m really geeking out here (Sherri 😜), but YOU GUYS… #rvlife! #johnsteinbeck! Travels with Charley in Search of America! 🤩 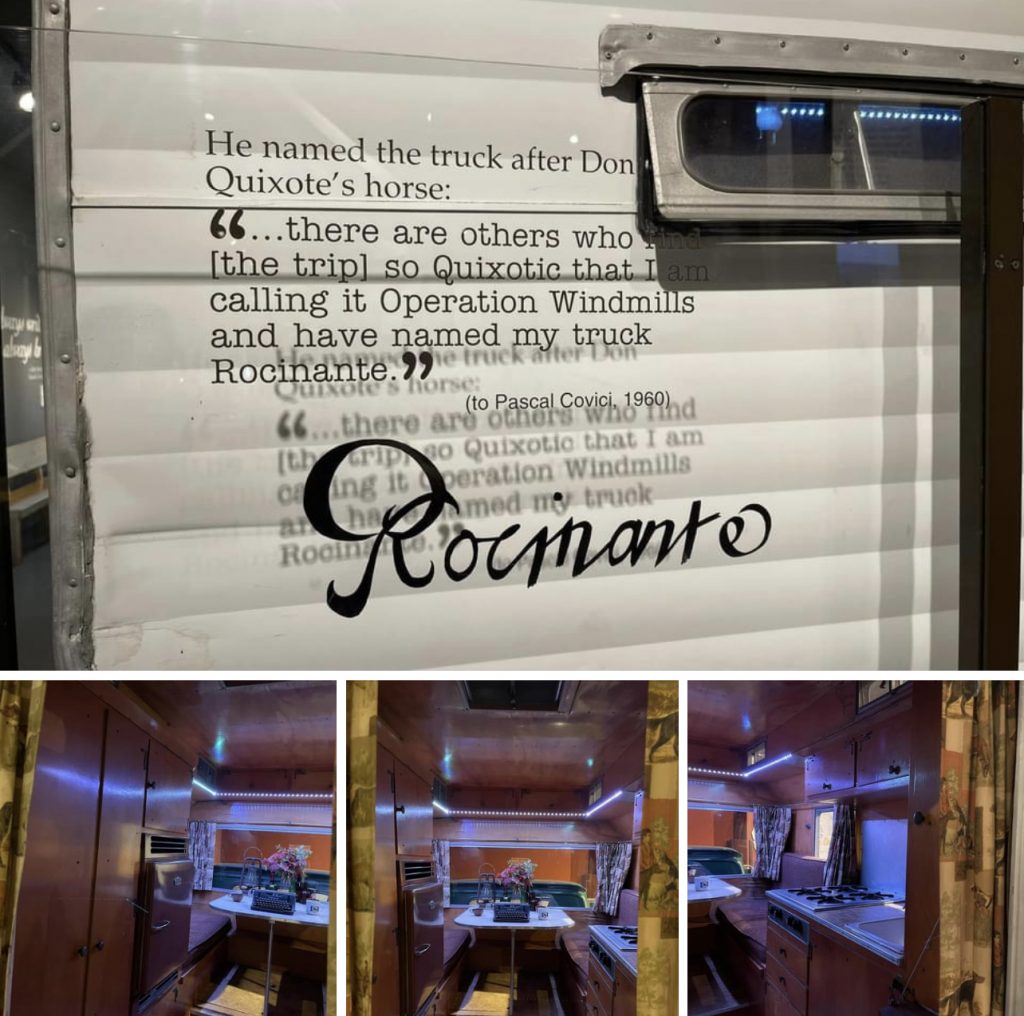 10 Fascinating Facts about Steinbeck in Salinas

“John Steinbeck died in New York City. Per his request his ashes are buried in the Hamilton Family plot (maternal grandparents) in the Garden of Memories in Salinas, California.” 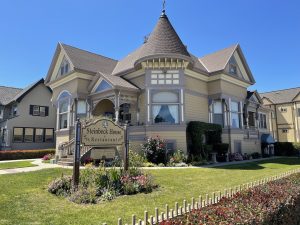 Although the house is certainly elegant by today’s standards, the Steinbecks were considered middle class in Salinas.

Steinbeck was born at home, in his parent’s bedroom. He stayed in the front bedroom with his parents until his younger sister Mary was born three years later.

John moved upstairs to the bedroom at the front of the house (above his parent’s bedroom) when he was 10 years old, after his two older sisters went off to college. He graduated from Salinas High School in 1919.

“I don’t remember when I didn’t write.”

Steinbeck was a prolific writer and storyteller from a very young age. It was in the upstairs bedroom of the Steinbeck House that he began writing his early stories and books, including The Red Pony (1933) and Tortilla Flat (1935).

[It took him a while to get published and become a world-famous author.]

After high school, Steinbeck attended Stanford University in nearby San Francisco, off and on, from 1919 – 1925. He was not a dedicated or involved student, or interested in anything other than literature and writing courses, and his own writing.

After six years, he dropped out of college without a degree. He worked as a manual laborer, a farm hand, and an off-season caretaker at a resort hotel. He liked that job because it gave him total isolation and time to write.

The marriage did not end well.

– Married to Elaine Scott (a Broadway stage manager) in 1950, until his death in 1968. By all accounts, Steinbeck seemed to find some measure of peace and happiness with Elaine.

5) Salinas gave Steinbeck the experiences, characters and setting for his most important works:

1937 – Of Mice and Men – highly-acclaimed novella about the friendship and tragedy of two migrant ranch workers in California during the Depression.

1939 – The Grapes of Wrath – Steinbeck’s iconic masterpiece about an Oklahoma Dust Bowl family forced to abandon their farm and journey to California in search of a new life. Awarded the Pulitzer Prize – 1940.

1945 – Cannery Row – set during the Depression, about the colorful characters and fringe community along the industrial waterfront and sardine factories of Monterey, CA.

* Tragic note: Steinbeck spent a lot of time down-and-out on Cannery Row, in real life. He based the main character of the novel, Doc, on his close friend, Ed Ricketts, a marine biologist and amateur philosopher. Steinbeck was devastated by Ricketts sudden death in 1948, when his car stalled on a train track and was hit by a train.

1952 – East of Eden – multi-generational saga set in Salinas, based on his own family history.

Steinbeck was awarded The Nobel Prize for Literature in 1962, based on his body of work and literary achievements. Many critics thought it was undeserved.

Controversy followed Steinbeck from the beginning of his career, for his outspoken social commentary and political activism:

“When Grapes of Wrath was published in April of 1939, it met with immediate praise–and harsh criticism. The book starkly portrays the social injustices faced by the American underclass during the Great Depression. Steinbeck’s portrayal of wealthy farmers, bank owners, and capitalism are hardly complimentary, which raised considerable ire across the country. In some places, copies of Grapes of Wrath were even burned.”

Read more about the Nobel Prize controversy: Did John Steinbeck Deserve a Nobel Prize for Grapes of Wrath? 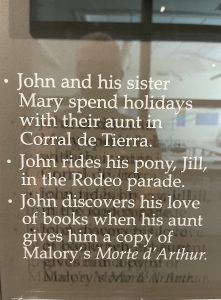 It started with a childhood gift: “John discovers his love of books when his aunt gives him a copy of Malory’s MORTE D’ARTHUR.”

Steinbeck spent decades of his life on a personal mission to translate and adapt the adult version of the legend from Malory. In 1959, he traveled to Somerset, England with Elaine for research. He described that trip as “the greatest year of my life.”

Steinbeck’s unfinished manuscript for The Acts of King Arthur and His Noble Knights was published posthumously in 1976.

Although Steinbeck was too poor to make it to Paris in the 1930s, he was a contemporary of F. Scott Fitzgerald (1896 – 1940) and Ernest Hemingway (1899 – 1961). All three were infamous authors who lived hard, achieved great success, enjoyed their liquor,  and suffered untimely deaths.

“Hemingway’s breakthrough novel appeared while Steinbeck was going hungry and struggling to write in New York.”

“Steinbeck was wary of Hemingway, gripped by the hesitancy one writer feels about another that is indistinguishable from envy.”

Although they certainly knew of each other’s work, the only time Steinbeck and Hemingway met was in passing at a bar in New York in the spring of 1944. They did not become friends.

I must admit, I was surprised to discover The Steinbeck House, which is listed on the National Register of Historic Places, operates less as a museum to John Steinbeck, and more as an exclusive restaurant (lunch only – reservations required), events facility, and gift shop.

It was definitely worth the visit, and a lovely lunch.

“Dining at The Steinbeck House is a unique experience. The restaurant in this Queen Anne style Victorian house serves gourmet lunches featuring fresh produce from the fields of the famous Salinas Valley. Menus change weekly to take advantage of the seasonal produce, wines and other products of Monterey County.”

“The Valley Guild (the group that manages The Steinbeck House) was organized in 1971 by eight civic-minded women who shared a common interest in cooking and showcasing the produce grown in the Salinas Valley. They purchased the 15 room Steinbeck House from the Catholic Diocese of Monterey in 1973.” (Formerly used as a boy’s home and a rooming house.)

After lunch, I walked up and down Main Street in Salinas, which is pleasant, open, and artsy: lots of shops and restaurants, a Starbucks (of course), a wonderful book shop, party lights strung along the wide sidewalks, and a big metal arch with SALINAS bridging over Main Street.

Salinas is authentic small-town America, with The Steinbeck Center as an anchor on the north end of Main Street, and The Steinbeck House just a couple of blocks west.

“The National Steinbeck Center… Building community and celebrating creativity, inspired by the words of John Steinbeck.”

I spent the morning at The Steinbeck Center, and returned after lunch for a couple of hours, just to soak up the ambiance and quiet environment. I loved being there.

The exhibits at The Steinbeck Center are amazing. Visitors meander through huge book covers, life-sized settings, memorabilia and scenes from his most well-known books and movies, with comfortable seating areas to watch short features about each book, with scenes from the movie, dramatic readings from the book, and other interesting information.

As you walk through the museum, you encounter seven different exhibits: 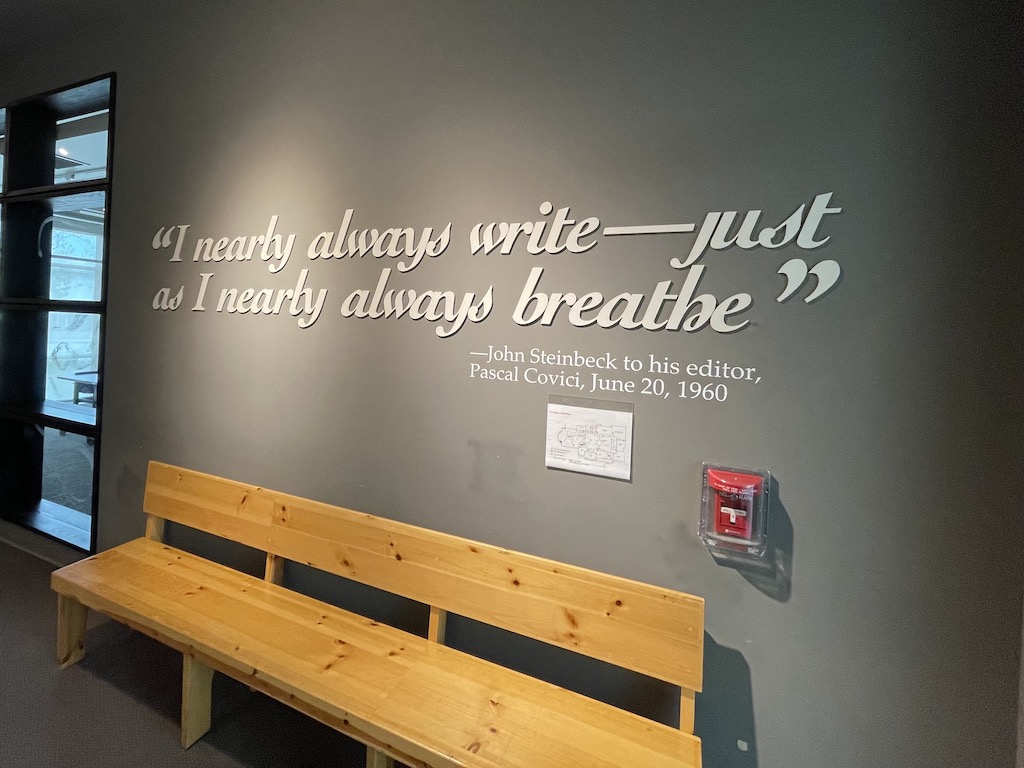 It was only one day… but it was amazing.

For traveling Book Lovers, I highly recommend a Literary Day Trip to Salinas, CA… in search of John Steinbeck!

–> Be sure to check out the Related Feature on BooksAndTravelUSA:

Thank you for reading!😘

We hope you enjoyed the article and are inspired and reassured through our RV experiences and adventures. If we can figure this out — and survive — so can you!

Explore & enjoy all the possibilities out there! Join us on our current & future RV adventures by subscribing at https://BooksAndTravelUSA.com — Be sure to CONFIRM your opt-in subscription when you receive the email! 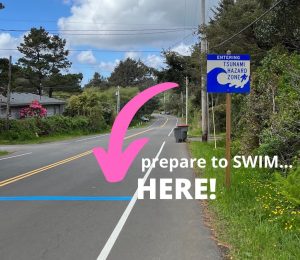 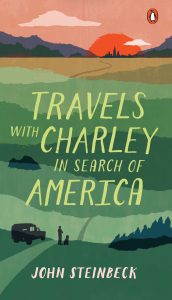 Why you, RV Traveler, must read Travels With Charley In Search of America! If you’re 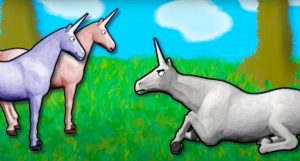 What’s your RV’s name? “Hello, we’re Russ & Sherri, and this is Charlie-The-Unicorn RV & 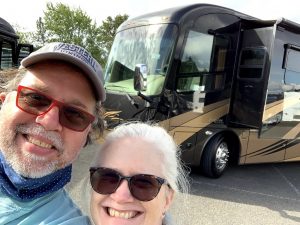 Have you ever been to an RV Show? If you are interested in RVs, looking 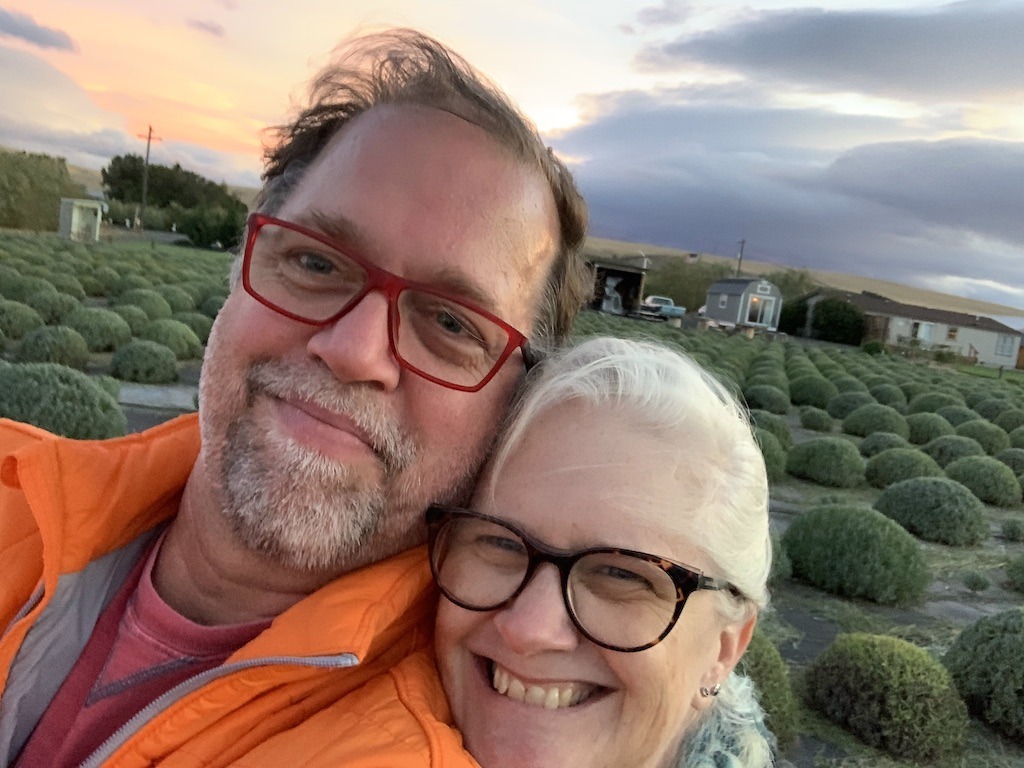 We are living, working & traveling the U.S. full-time in our 2016 Entegra Aspire 40′ Class A Motorhome named Charlie The Unicorn. Join us on our GenX Post-pandemic Adventure! 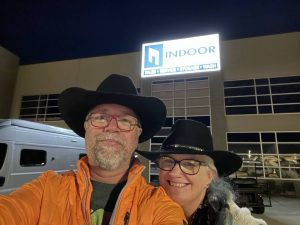 NIRVC: Why Nothing But The Best RV Service Center Will Do 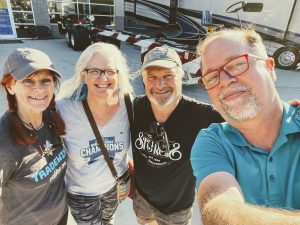 RV YouTube Superstars: LOOK Who We Found In Atlanta! 👀 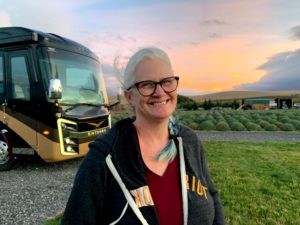 Full-Time RV Beginners: Top 15 Things We Learned On The Road

Are you ready for a new adventure?
Join us on the road!

( You can unsubscribe at any time )

National Parks in the US are the some of the most

If you haven’t attended EntegraU then you really

Crazy and fun time visiting all the vendors and RV

Big time fun at the Columbia Restaurant in Tampa w

Beautiful nights with my lady here at #floridarvsu

2023 Tampa RV show just getting started, lots of a 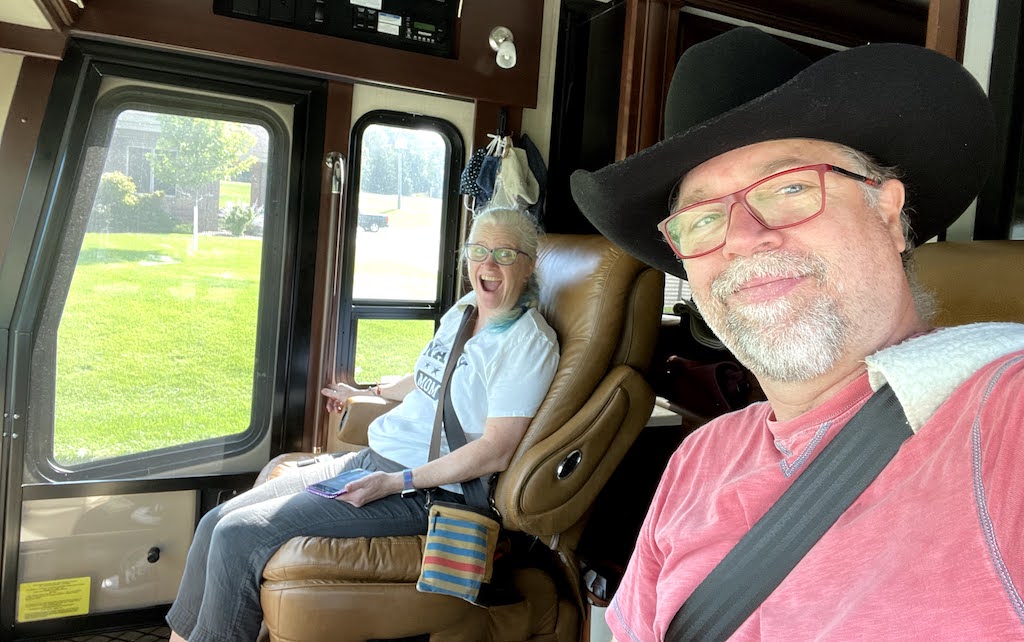 We just sent you a confirmation email.
Find that and click ‘Confirm‘ and then you will be on the list!

(Check your spam folder if you can’t find it.)